Most trans discourse online that’s written for a majority cis audience is (sorry) exceedingly cursed. I’m going to give it my best shot, however, because I want to explore something I feel is well-discussed in trans circles, but not outside of them: how class and being trans intersect. Most of the rubbish that gets written about us is devoid of any thinking on this.

I should start by saying that I’m myself safely middle-class (and a trans woman, to a first approximation). This means my transition has been quite straightforward, as much as these things ever are. I’ve chosen to take a pretty conventional route; I’ve gone via the NHS but have been able to augment that with some private treatment while I was waiting; I work a professional job in a supportive company; and I’m good at navigating medical and legal bureaucracy. All of this has meant my transition has been relatively smooth. I’m happy. It’s gone well.

This isn’t true for everyone who wants medical transition, which is incredibly unjust. Some NHS Gender Identity Clinics have waiting times in excess of half a decade; two years is the minimum in England. I have friends who are in debt because they work badly-paid jobs and were forced to give a large portion of their income to private medical providers; friends who can’t afford the tests to help make self-medication of hormones safe. Not everybody is in a job where time off for surgery is practical or possible. Not everybody wants to medically transition either, and it shouldn’t be a requirement to be accepted by society, to access public services or to change documents.

Trans people in precarious, non-unionised work feel unable to present as themselves – they can be fired for any reason or have their hours cut in retaliation. Mental health issues – due to in no small part all of this material stress – are not uncommon, and for those without money for private therapy the provisions that are there are patchy and irrelevant to our needs. Clothing costs so much – imagine replacing your entire wardrobe – and actually that really does impact almost everyone. Binders are costly too, until this year needing to be imported from the US. A bunch of trans people I know talk about the “trans tax”; all that other stuff that people struggle with, because we’re from all walks of life, but on top of that is extra, constant financial pressure, exacerbated by a society that craves normativity even as it doesn’t provide any help to reach it. Some of us can. Most can’t.

It is and has always been the case that those who can pay have an easier time of transition; it ought not to be like that. It shouldn’t be like this. It doesn’t have to be like this – the current state of trans healthcare is a political choice. We could change things to make hormones available in primary care; force GPs to actually follow the official harm reduction guidelines for self-medicating trans patients, providing bridging prescriptions and blood tests; we could create new structures on the bones of what came before based on equitability and accessibility. We must reaffirm these principles across the NHS, but particularly in trans healthcare.

But while we’re building a better tomorrow, the now is unfair. So to bring this around: I guess the reason I’m feeling actually livid about this now is because of some of the discussion about swimming pools. God, I miss swimming. I’m so looking forward to doing it again soon. Lots of trans people feel like this; when your body begins to move outside the bounds of the socially acceptable, spaces like swimming pools become scary places. When people say “well, sure, maybe let trans people into these spaces, but only if they’ve had The Surgery” (and by the way, what does that even mean – it’s often focused on a particular surgery that some trans women and non-binary folk have, basically just ignoring trans men), what they are effectively saying is – because transition is so impacted by class and income – ‘alright, fine, let trans people in – but only the rich ones.’

This is why it’s not enough to bend the knee and ask for acceptance once we achieve normative bodies. Our bodies are not normative; our attempts to make them so are predicated on capitalist success. Therefore, in my view, trans liberation must be socialist liberation – it’s not just about superficial equality and acceptance but about real futures. On a small scale, support the trans people in your life by thinking about what material support you can give them; in the large ways, make sure to reject the idea that there is a single, acceptable way to be trans, because it is ultimately based in a politics of pulling up the public ladder for those who can’t afford to build their own. 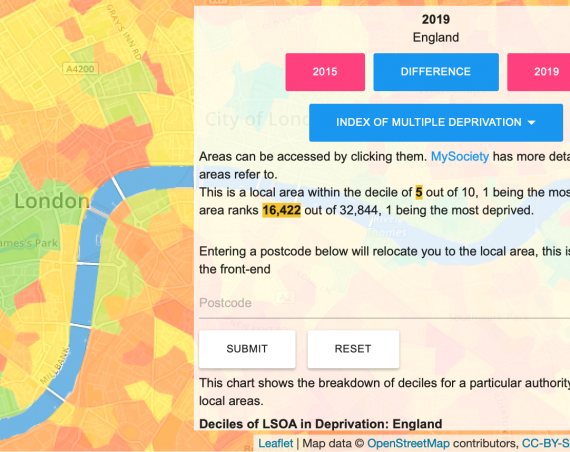 The Data Review: The Deprivation Index

The Spectator and Media Transphobia