In Max Brooks’ popular zombie novel ‘World War Z’, there is a class of zombie-like creatures called ‘Quislings’. Quislings (who presumably take their name from the Nazi-installed wartime Prime Minister of Norway) look and act like the undead, but are actually entirely human. The shock of the dead rising and the fracturing of society’s norms simply broke them, and now they act like zombies to keep up with the post-apocalyptic Joneses.

The great tragedy of quislings, however, is that though they look like zombies to us, zombies only see them as human. It doesn’t matter how many humans quislings bite, or how wholeheartedly they play the part. The zombies will eat them just the same.

Then, this state of affairs reached what is perhaps its apotheosis; 3 days before an election, Laura Kuenssberg tweeted to one million people that a Labour activist had assaulted Matt Hancock’s advisor. She later posted video footage that conclusively disproved this fact. As a result, all across the land, people will have received push notifications like this one: 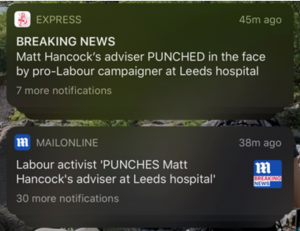 I am one of the many Labour people who reacted to 2015 by becoming profoundly Sensible. I accepted that being Labour leader was just – as it so often said – ‘playing politics on Hard Mode’, and viewed those critiquing the coverage and screaming about the ‘Biased Broadcasting Corporation’ as ‘BBC cranks’. This election, however, the BBC has disgraced itself. We are all BBC cranks now.

There is, however, a caveat to be made here. I don’t necessarily think that the Beeb’s behaviour this election proves some deep-lying Tory bias inherent to Broadcasting House. A key part of the problem is the BBC’s outlook. For years, the corporation has clung to a version of impartiality where the ‘sensible centre ground’ lies between two opposing points. For instance, Labour might say that they want to invest in infrastructure, to boost the economy. The Tories might say that this will cost too much – instead, they are going to cut tax to boost business. The BBC will take the centre ground of ‘well, these are both points with pros and cons’, and the public can decide which one they think sounds best. This is fine and responsible reporting.

However, if one side decides to just start lying, the BBC has no mechanism to deal with it. This means that if I claim the moon is made of cheese, and all the scientists argue it is made of rock, the sensible BBC position is either:

a) Well, there’s a real debate to be had here!

b) The moon is made half of cheese and half of rock.

Neither of these positions are good.

If Boris Johnson lies about nurse numbers, and Labour point this out, a responsible journalist might say ‘this is a lie’. The BBC position is to say that ‘there is a debate about nurse numbers’. This is a strategy that simply does not work given that the Conservatives revel in tearing up norms. Causing outrage is the point. It’s not just that dodging Andrew Neil is unfair and gives them a tactical advantage – though this certainly doesn’t hurt – but it’s also that doing this will upset everyone who isn’t on their team. Our politics have become as much about pissing off the other side, about ‘triggering the libs’, as they have about substantive policy issues.

Much like the Quisling Zombies in my opening, it’s genuinely sad to have seen the BBC bend over backwards to accommodate the Tory party, only to hear Johnson say he’ll privatise them anyway. It doesn’t matter how committedly the BBC plays the part. They are going to get eaten regardless. Given the sorry mess of their election coverage, it’s perhaps tempting to throw in the towel on public service broadcasting. This, however, would be a catastrophic error.

The Libertarian wing of the Conservative Party has wanted to break up the Beeb for some time. What they would replace it with is immeasurably worse. When commentators like Tom Harwood argue for increased market access, you know they are not envisioning a tightly regulated group of networks trying to give the public good, honest journalism. They are envisioning a US-style system of increasingly unhinged partisan networks, most recognisable in the form of Fox News. Fox reliably skews voters Republican – their viewers are often misinformed, and Fox talking points keep getting parroted by right-wing murderers. This is not something we want. There are those who argue that perhaps a left-wing competitor would spring up, spewing equally untrue stuff, as some sort of balance. This would simply cement us further in the Cultural Forever-War, and the established operators in this field – Guido Fawkes on the Right, the Canary and Skwawkbox on the Left – are not actors I wish to see taking a prominent role in society.

An argument is often made that the BBC should be less watchable, and produce more niche programming. The reasoning behind this is simple: the BBC has a colossal advantage over other broadcasters. It enjoys a huge monopoly on broadcasting in the UK, is internationally respected, and gets money from literally everyone who owns a television in the UK. It has the resources, time, and near-guaranteed market share to produce almost anything it wants, and can thus produce television that other networks, reliant on the market, wouldn’t dare to.

With this in mind, what if the BBC applied the same thinking to its news coverage? One of the chief complaints – particularly in the time Laura Kuenssberg has served as Political Editor – is that the BBC is far too willing to simply reproduce Government lines. Yet this seems to be less down to ideological bias and more shoddy journalism. Too often, the BBC appears to be less interested in fact-checking, and more interested in the story out first. The BBC – arguably – should not be in this business. They have the resources, time, and market share to serve as the arbiter of stories others put out. They have the time to research a story and prove its veracity. Whereas other channels have to be constantly breaking news to stay relevant, the BBC – free as it is from the same commercial concerns as other channels – could be a genuine engine for good, never quite breaking news, but always there at 9 o’clock with the facts. In conjunction with this new, improved viewpoint, it might be wise to discourage correspondents from tweeting. Jim Waterson of the Guardian argued that in the case of Kuenssberg, part of the problem is a tendency to view Twitter as ‘a public notepad for half-thoughts and quick takes.’ This is fine if you are a baby hack doing their journalism course at City. It’s less okay if you’re the literal political editor of the BBC, with over a million followers. Kuenssberg should be aware that one million people do not follow her because she is Laura Kuenssberg. They follow her because she is political editor of the BBC. As the tweet goes; we all follow her. Because she’s the political editor of the BBC. For senior BBC reporters, social media should be for personal posts and updates on their work. There are plenty of professions where one is expected to maintain a level of professional decorum on social media. I would argue that being a journalist as part of the state-ran broadcaster, with unparalleled reach, should become one of them.

As it stands, the BBC faces a cut to the licence fee from the right, and has alienated many on the left. Something has to give; and stepping away from breathless live coverage to measured analysis might be a path back to public service broadcasting being a national treasure once more.