“The Work Outing”, possibly one of the best-known episodes of late-2000s sitcom The IT Crowd, holds a special place in the hearts of my housemates and me for two reasons. The first is Roy’s famous “I’m disabled!” line after he is found using the disabled toilets, which those of us with disabilities are often fond of quoting, and the second is the various excerpts from the fictional production “Gay! A Gay Musical”. However, as trans people, our enjoyment of the episode relies on our ability to forget that its writer and director happens to hate us.

Why do I bring up Graham Linehan specifically? After creating significant and well-loved British sitcoms like The IT Crowd, Father Ted and Black Books, Linehan has devoted his attention to that most oppressive of minorities – trans women. At the time of writing, twenty-six of his tweets and retweets in the past twenty-four hours were critical of trans people, and especially trans women.

Given that so-called “gender-critical feminists” emphasise the importance of amplifying women’s voices over those of men, one might think they wouldn’t be so keen on Graham’s frequent contributions with regard to the trans community. On the contrary, he is practically the golden boy of the movement, with his exhortations on the subject often raised above those of mere trans-supportive cisgender women (after all, what do they know about women?).

Graham even delights in retweeting and mocking those men who object to his views, because, after all, men shouldn’t talk over women on feminist issues. Our noble warrior has sacrificed so much in the struggle against any form of self-awareness, even being served with a Public Information Notice by our fascist law enforcement for, erm, revealing a trans woman’s personal data to his 666,000 followers.

Moving on from this self-appointed Defender of Women, this is far from the only instance in which the appeal to listen to the voices of (cis) women has seemingly failed to apply to those who happen to be supportive of trans women. After London Pride was hijacked by an organisation called Get the L Out, who aim to separate lesbians from the LGBT community, a counter-movement was set up by Brighton activists called #LwiththeT. They encouraged cis lesbians to declare their support for trans women on social media, and ended up leading the parades at Trans Pride and Brighton Pride earlier this year. Similar banners later graced pride events in Manchester and Cardiff.

Did the leaders and members of organisations such as Fair Play for Women and A Woman’s Place take on board the fact that many cis lesbians are perfectly fine with trans women? Of course not; they either ignored the movement entirely or moved the goalposts. After all, since trans women are obviously actually men, any lesbian who is attracted to them is clearly bisexual (or even a “closeted bisexual handmaiden to trans women”), although strangely she is completely unable to be attracted to any cis man.

It is, frankly, astonishing how the act of demonising a minority which is already marginalised and suffers from greatly elevated levels of mental illness and violence, and prioritising straight men over lesbians in the process, could be seen as in any way progressive. It makes a mockery of the perpetrators’ claims to be protecting women and safeguarding children.

Earlier this year, Transgender Trend published a booklet entitled “Supporting gender diverse and trans-identified students in schools”, which ostensibly aims to help teachers and school staff deal with those pupils who are as confused about their gender as the writers clearly are about the use of hyphens. Backed by rigorous scientific sources like Tumblr surveys and Transgender Trend’s own publications, the booklet promotes common myths about trans boys being lesbians who are afraid to come out (because being openly trans is so much easier), too autistic to understand their own gender (not offensive at all), or simply confused because they don’t fit into gender stereotypes (remember the good old days, when trans people didn’t exist because there were no gender stereotypes?).

Similarly, an article published recently in that bastion of liberal feminism, The Mail on Sunday, reported on an anonymous interview with a teacher complaining about all the trans kids there are these days. Not content with revealing personal and confidential information on the pupils in her care, which would probably get her sacked if her identity were revealed, “Carol” tells storied of how, for instance, “transgender pupils tend to … [wear] their hair in a quiff and [dye] it blue, black or blond, and [start] to wear large round glasses, Dr Martens boots, donkey jackets and tight trousers”. I have doubts about her assessment of trans fashion, which makes it sound as though all trans boys cosplay as a 2018 version of Michael Foot.

“Carol” also reveals that trans boys “become quite powerful within the school”, that they “become trans” to avoid being bullied for being a lesbian and even resemble “popstars like Justin Bieber” (it’s 2018 “Carol”, pick a newer reference). There’s also a darker side to this article, which compares older trans children encouraging younger children to come out to “grooming”. A national newspaper comparing marginalised teenagers to sex offenders is a disgusting new low for this whole debate. Near the end of the article, the use of “[an older transgender student]” in one of Carol’s quotes makes it clear that she revealed a pupil’s name and their trans status to a journalist – a huge breach of safeguarding protocols and easily a sackable offence.

Transgender Trend’s booklet and the Mail on Sunday’s article are hardly isolated cases, and in fact many teachers are likely to see them as vindicating their own position. A friend who worked in a school told me that although policies on transgender students may be in place, awareness among staff is often severely lacking, leading to inadequate enforcement of these policies. When I was a trainee teacher on placement at a particularly trans-friendly school in a progressive part of the country, I frequently heard transphobic comments from members of staff, including form tutors (who will often be one of the first points of contact for pupils with questions about their identities).

It is clear that whatever the school and the Senior Leadership Team may say or think, there are still school-wide issues that must be tackled if trans children are to be supported. Children and teenagers often trust their teachers to help and support them, especially with issues they feel they can’t discuss with family or friends. If this support is lacking, then the school environment many transphobes seem to believe in where schools are quick to act on pupils’ gender-based whims, is clearly a work of fiction.

The pendulum of public opinion has been slowly swinging towards acceptance of the LGBT+ community since the decriminalisation of homosexuality in 1967. Unfortunately, myself and many other trans people are concerned that for at least a quarter of this group, the pendulum may be swinging back in the other direction. Cis women, and especially cis lesbians, who support trans women need to ensure that their voices are heard in this discussion. While normally I would argue that members of marginalised groups should be the ones speaking up in discussions concerning their own rights, I sadly do not believe that this would convince anyone to change their position. People need to be persuaded that trans women, and in particular trans lesbians, are not merely men looking for an excuse to get lesbians to sleep with them, as many transphobes like to claim. Cis lesbians, in particular, should emphasise that trans lesbians merely want to have relationships, just the same as they do, without our identities or those of our partners being placed under the microscope.

Alternatively, those who like to attack trans women might want to consider spending their time getting to know us instead – they might be surprised to learn that we’re nothing more than people who want to get on with our lives. 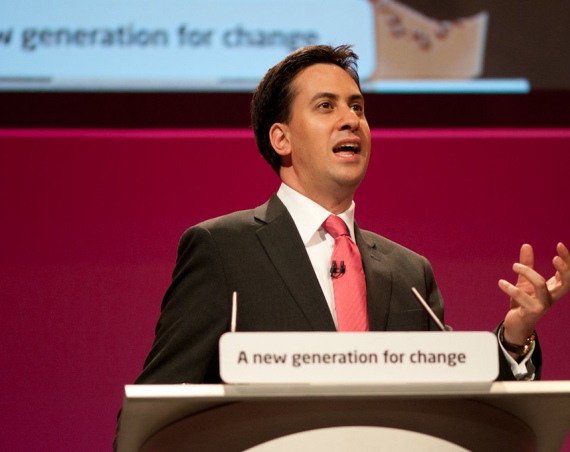 A Steel Spine for Ed Miliband